Perhaps it is the lifelike-perfection 3D scanning software is capable of that attracts artists to mess with scan data and play with the errors and vulnerabilities inherent in 3D scanning systems. With it, they create art that makes us uncomfortable or offers a fascinating, dystopian vision of the world around us. Here are a few of our favourite 3D scanning art projects that inspire us.

Laser scanning is vulnerable to accumulating errors over time and misinterpreting environmental elements in certain contexts. ScanLAB has spent the past decade seeking out conditions adverse for scanning from foggy mist to deep woodlands, and capturing its limitations in ways that amaze, entrance, and reveal the beauty of the natural world through a new lens. As BLDGBLOG’s Geoff Manaugh explains, “the data Shaw and Trossell generate is somewhere between image, model, and film—making it a powerful medium for documenting natural phenomena.”

We chose ScanLAB’s 2015 project The Dream Life of Driverless Cars, a collab with The New York Times, for its drama of capturing what Mr. Trossell calls the “mad machine hallucinations’’ of a driverless car dependent on LIDAR pulse scanning to travel through the streets of London. It is beautiful, thought-provoking, and powerful to watch, rigged to accentuate the tech’s limitations in an aesthetically pleasing way. ScanLAB disabled certain aspects of the car’s sensors and removed corrective algorithms from the scanning system in order to make the captured scan more whimsically interesting. This places the project into somewhat ambiguous territory – is it meant as a critical commentary like some of ScanLAB’s other investigative projects, like documenting ice floes or deforestation for Greenpeace? Or is The Dream Life of Driverless Cars simply meant as art?

Phrases like “the peripheral vision” & “algorithmic dreams” of machines might make me uncomfortable, but I agree with The New York Times and can only applaud ScanLAB’s attempt to establish a new Romanticism, one similarly interested in documenting extreme landscapes but seen through the eyes of autonomous machines. You go, ScanLAB.

We’ve already established our appetite for noir 3D scanning action, and here is another gem. French CG artist Antoine Delach’s 2016 Ghost Cell is a “stereoscopic plunge into the guts of an organic Paris seen as a cell through a virtual microscope”. The six-minute short won the audience prize at the Clermont-Ferrand International Short Film Festival, and there’s even a stereoscopic version of the film that can be viewed with anaglyph glasses – immersive 3D art!

Like the ScanLAB project, Ghost Cell is interested in applying 3D laser imaging for an artistic purpose. Delach also enjoyed the “buggy” quality of the scans, combining point cloud and wireframe imagery for maximum effect in what has been called a “stereoscopic opus”. Delach and a small team took the 3D scans and added movements to the action, trying to create a visual story link between human structures and patterns in nature. As Delach explained; “There was actually a scientific study that compared the growth of a mushroom and the route of a city road, and it was exactly the same pattern.”

Delach was open about his experience and technology-journey scanning, saying that he landed on photogrammetry, an affordable 3D capture process capable of scanning big structures, after a failed attempt using the Microsoft Kinect. The software he used for scanning was Autodesk’s 123D Catch, with animations created in Autodesk’s 3ds Max.

In 2014, glitch artist Clement Valla stumbled upon a gold mine for his continuing exploration of 3D/2D mashup work: caches of images used for texturing a 3D model scan available in all their fragmented glory on the Autodesk 123D Catch photogrammetry app’s public website. Searching specifically for ‘test’ and ‘first’ tags to increase the cast-off ‘junk’ appeal of this material, Valla constructed digital prints of the image fragments to include alongside similar works featuring chunks of texture maps taken from scans of famous sculptures from the The Met and The Smithsonian, and other contemporary and 19th century inventions.

Partly, the interest in these fragments of 3D image files is driven by the idea that machine or software-generated content is ‘not meant for human eyes’, and hanging it in a gallery casts a new net of human meaning over something previously overlooked. Valla might have been overestimating how distant texture mapping is from human touch (after all, 3D modellers and artists use texture maps and UV wrapping as an integral part of their work), but artists approaching 3D modelling from the outside can offer a refreshing lens on the daily fare of others.

3D scanning is always creative, skillful and purposeful. But at what point is it art? The projects gathered here all take 3D scanning as a base for further, sometimes radical, artistic manipulation, but these extremes are hardly necessary to tip the scales. If you know of an artistic project involving 3D scanning (especially if created with the Matter and Form 3D Scanner) please share with us in the comments!

The Educator’s Guide:
How
STEM Learning Is Shaping the Future 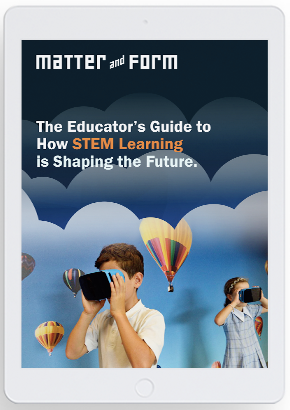